In these days of political correctness the use of the word "Nigger" has changed in public acceptance  much as the word "Gay" has also changed its underlying meaning and tone. However, at the time I am writing about, the word was used to name the dog from colour of  its coat. In a strange about-turn of what was acceptable, in those times. The pejorative word used in the UK back then to describe people of African origin was "Blackie".  Times change as do word meanings and people become more aware of the racist undertones. I feel sure that no offence was intended then or now by Guy Gibson in the naming the dog.
As a child my memories are filled with my first love, a dog companion who was also called Nigger. His name came from the colour of his coat. Much of my love of dogs is as a result of time I spent in the company of Nigger. He was my constant companion, on my short walk to school each day. He would return later to wait at the gates, to walk me home. My parents would never have even considered for one moment calling the dog "Blackie" for what would have been to them at that time a very derogatory name. Today, we know a couple of younger people with dogs called Blackie. The name describes the dog and and caries no derogatory or pejorative connotations. These individuals are not old enough to harbour knowledge of an old name that once carried so much ignorance and prejudice.
Poppy's Dad.
Hello everyone. 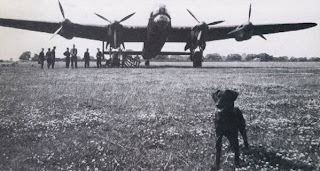 Nigger who is the subject of today's celebrity dog posting was a rather handsome black Labrador retriever belonging to Wing Commander, Guy Penrose Gibson VC. (The Victoria Cross is the highest military decoration which is, or has been, awarded for valour "in the face of the enemy" to members of the British armed forces)
Commander Gibson also was awarded a DSO and Bar. The Distinguished Service Order is a military decoration awarded for meritorious or distinguished service by officers of the armed forces during wartime. When used in conjunction with decorations for gallantry medals, the term "and bar" means that the award has been bestowed multiple times upon the officer.
Commander Gibson was also was awarded a DFC and bar. The Distinguished Flying Cross is a military decoration awarded to personnel of the Royal Air Force, for "an act or acts of valour, courage or devotion to duty whilst flying in active operations against the enemy". 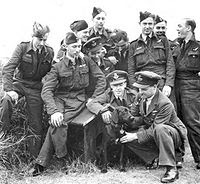 Nigger was the mascot of 617 Squadron (the Dam Busters) commanded by Guy Gibson. Nigger died on 16 May 1943, the day before the famous raid, when he was hit by a car. He was buried at midnight as Gibson was leading the raid. "Nigger" was the codeword Gibson used to confirm the breach of the Möhne Dam.
Nigger with members of 617 Squadron. His owner, Guy Gibson can be seen crouching on the right. Love to all.
XX Poppy