We have been away on the boat for three weeks but now we are back. Latest news is that Abbie has now permanently joined the boat crew. She is proving to be a good buddy when dealing with that pesky cat Jasper.  So more news on our latest trip with the boat is to follow soon.
Today's celebrity dog is Jet or "Jet of Lada". Jet was a stunning black Alsatian, who assisted in the rescue of 150 people trapped under blitzed buildings. He was a pedigree dog born in Liverpool, and served with the Civil Defence Services of London. He was awarded both the Dickin Medal and the RSPCA's Medallion of Valor for his rescue efforts.
He was loaned to be trained at the War Dogs School in Gloucester from the age of nine months, where he was trained in anti-sabotage work. Following eighteen months work on airfields performing anti-sabotage duties he was returned to the school for further training in search and rescue duties where he was partnered with Corporal Wardle. They were relocated to London where Jet was known for calling out every night until the end of the air attacks. Corporal Wardle and Jet were the first handler and dog to be used in an official capacity in Civil Defence rescue duties. 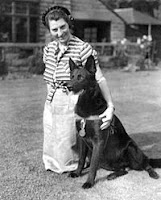 He was awarded the Dickin Medal on January 12 1945 for saving the lives of over fifty people trapped in bombed buildings.The dedication read "For being responsible for the rescue of persons trapped under blitzed buildings while serving with the Civil Defence Services of London." Following the war, he was returned to his owner in Liverpool.
Mrs Babcock Cleaver with Jet of Iada wearing his Dickin Medal.
On 15 August 1947, an explosion occurred in the William Pit near Whitehaven, Cumbria. Dogs trained in body recovery work were unavailable, so two dogs were sent from the RAF Police Dog School at Staverton, and Jet was collected from his owner on the journey north.
After his efforts he was awarded the RSPCA's Medallion of Valor. There is a memorial to Jet in the English flower garden of Calderstones Park, Liverpool near where he is buried.