Today, we bring another amazing story of the bond between a dog and their owners. When Eve and Norman Fertig rescued a sick, two-week-old half wolf, half German shepherd puppy from a breeder, they would  never dreamed that the animal one day would save their lives.

When one evening the 81-year-old Eve and Norman Fertigs were treating injured animals in the forest sanctuary on their property. It was routine for the couple to feed and exercise the dozen or so animals there every night. "While were there, the lights went out and I realized that something had gone wrong. We went outside to see what's was happening and down come a massive tree it fell across us."

The huge storm that hit that night brought down a large number of trees, blocking the Fertig's path to the other sanctuary buildings and to their home. "We were in big trouble, I think we could die out here." Eve said.

The Fertigs huddled in a narrow alley between their building and the aviary, where they sheltered from falling trees. They couldn't climb over the trees without injuring themselves. Neither had warm clothes on since it was a clear, crisp fall day just a few hours ago. They hugged each other for warmth. 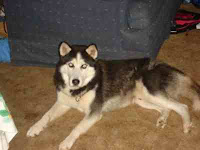 Eve said "I wasn't prepared for this … I thought, 'we're trapped, we're absolutely trapped. That's when Shana began to dig beneath the fallen trees."


The 160-pound dog that habitually follows her owners around when Shana eventually found the Fertigs and began digging a path in the snow with her teeth and claws underneath the fallen trees, similar to a mineshaft, and barking as if to tell them to follow. A reluctant Norm said, "I had enough in Okinawa in a foxhole," referring to his service in World War II. "'Norman, if you do not follow me, I will get a divorce,'" Eve said to her husband of 62 years. "That did it. He said, 'a divorce? That would scandal our family.' I said, 'all of our family is dead, Norman!'"

After Shana tunnelled all the way to the house a process that took several hours she came back, grabbed the sleeve of Eve's jacket, and threw the 86-pound woman over her back and neck, which Eve described as "as wide as our kitchen shelf." Norman grabbed Eve's legs, and the dog pulled them through the tunnel, under the trees and through an opening in a fence to the house, at which they arrived around 2 a.m.

Concerned neighbours — many of whom had children Eve taught — who couldn't get hold of the elderly couple via telephone throughout the night had called the Town Line Fire Department.

"It was the most heroic thing I've ever seen in my life," Eve said. "We opened the door and we just fell in and she laid on top of us and just stayed there and kept us alive … that's where we laid until the fireman found us." There was no electricity and no heat in the house, so Shana acted as a living, breathing generator for the exhausted Fertigs until the local fire department arrived the next morning.

But when the fire department urged the Fertigs to go to the firehouse to take shelter along with 100 others, they told them they would have to leave Shana behind. "We said, 'we don't go anywhere without her." So the couple stayed at home with Shana until Sunday, when the fire house emptied out. During the three days in a house with no power, heat or hot water, Shana slept with her owners to keep them warm. "She kept us alive. She really did," Eve said.

Also during that time, firefighters not only helped clear trees from their grounds, but they brought food and water for both human and animal. "They kept looking at that tunnel and said, 'we've never seen anything like it,'" she said. "I can't thank them enough, they're heroes." When they went to stay at the fire house, Shana followed the Fertigs everywhere, even to the bathroom. And she was 'spoiled rotten' by the fire crews there, Eve said. The fire chief said her story of being saved by her pet rejuvenated exhausted fire teams. "The story, they said, just gave them new hope."

Shana received the Citizens for Humane Animal Treatment's Hero's Award for bravery an award traditionally given to humans. The plaque, complete with Shana's picture on it, hangs in the Fertigs' living room, along with other pictures of other wolves the couple have worked with. Eve, who teaches courses in Saving Endangered Species and Caring for Injured and Orphaned Wildlife at community colleges and trains animal rehabilitation in New York, said she hopes her story will help further her message of humanity toward animals and educate people about how even a wolf, if treated with care and dignity, can be a "kisser and a hugger" like Shana. "If you're vicious to a human being, they'll become fighters," Eve said, but even wolves, "once you treat them right and raise them in your house, they're magnificent."