Today I have an truly amazing tale of courage and daring, one that will amaze and move any animal lover to tears of joy and sorrow. I think that everyone will know that the Husky sled dog was the primary means of transportation and communication in subarctic communities around the world. Long before the first aircraft flew in Arctic conditions in the 1930s. Long before the snowmobile arrived in the 1960s. Both new means of transport which drove the use of a dog sled almost to the point of extinction.

We are going back in time to the summer of 1924, the only doctor in Nome Alaska and the surrounding communities was Dr Curtis Welch. His supply of 80,000 units of diphtheria antitoxin (dated 1918) had time expired. The replacement order for serum he had placed with the health commissioner in Juneau had not arrived before the port closed for the winter freeze.

On January 22, 1925, Welch sent a radio telegram and alerted all major towns in Alaska including the governor in Juneau of a major risk to public health. In a second radio telegram to the Public Health Service in Washington, Dr Welch wrote: "An epidemic of diphtheria is almost inevitable here STOP I am in urgent need of one million units of diphtheria antitoxin STOP Mail is only form of transportation STOP I have made application to Commissioner of Health of the Territories for antitoxin already STOP There are about 3000 white natives in the district. STOP"

And so began what became known as at the time as the "Great Race of Mercy" when 20 mushers and about 150 sled dogs relayed diphtheria antitoxin 674 miles (1,085 km) across Alaska in a record-breaking five and a half days. (Nenana to Nome by dog sled normally took 25 days)

The temperatures across the Interior were at 20-year lows due to a high pressure system from the Arctic, in Fairbanks the temperature was already at −50 °F (−46 °C).  Thus in these exceptional weather conditions Balto, Blackie, and Togo the Husky and their brothers and sisters saved the small city of Nome and the surrounding communities from an incipient epidemic. Both the mushers and their dogs were later portrayed as heroes and received headline coverage in newspapers all across the World.

The first musher in the relay was "Wild Bill" Shannon. Despite a temperature of −50 °F (−46 °C), Shannon left immediately with his team of 9 inexperienced dogs, led by Blackie. The temperature began to drop, and the team was forced onto the colder ice of the river. Shannon developed hypothermia. He reached Minto at 3 AM, with parts of his face black from frostbite. The temperature was −62 °F (−52 °C). After warming the serum by the fire and resting for four hours, Shannon dropped three exhausted dogs from his team and left with the remaining 6.

Edgar Kallands waited in Tolovana. Shannon and his team arrived in bad shape at 11 AM, and handed over the serum. Kallands headed into the forest. The temperature had risen to −56 °F (−49 °C), and according to one report, they had to pour hot water over Kallands' hands to get them off the sled's handlebar when he arrived at 4 PM.

George Nollner delivered the serum to Charlie Evans at Bishop Mountain on January 30 at 3 AM. The temperature had warmed slightly, but at −62 °F (−52 °C) was dropping again. Evans relied on his lead dogs when he passed through ice fog where the Koyukuk River had broken through and surged over the ice, but forgot to protect the groins of his two short-haired mixed breed lead dogs with rabbit skins. Both dogs collapsed with frostbite. He arrived at 10 AM; both lead dogs were dead. Musher Tommy Patsy departed on his leg of the trip within half an hour.

The serum then crossed the Kaltag Portage in the hands of Victor Anagick, who handed it to his fellow Alaska Native Myles Gonangnan on the shores of the Sound, at Unalakleet on January 31 at 5 AM. Gonangan saw the signs of a storm brewing, and decided not to take the shortcut across the dangerous ice of the Sound. He departed at 5:30 AM, and as he crossed the hills, "the eddies of drifting, swirling snow passing between the dog's legs and under the bellies made them appear to be fording a fast running river." The whiteout conditions cleared as he reached the shore, and the gale-force winds drove the wind chill to −70 °F (−57 °C). At 3 PM he arrived at Shaktoolik. Seppala was not there, but Henry Ivanoff was waiting on stand-by just in case.

Leonhard Seppala and his dog sled team, with his lead dog Togo, traveled 91 miles (146 km) from Nome into the oncoming storm. They took the shortcut across the Norton Sound, and headed toward Shaktoolik. The temperature in Nome was a relatively warm −20 °F (−29 °C), but in Shaktoolik the temperature was estimated at −30 °F (−34 °C), and the gale force winds causing a wind chill of −85 °F (−65 °C).

Henry Ivanoff's team ran into a reindeer and got tangled up just outside of Shaktoolik. Seppala still believed he had more than 100 miles (160 km) to go and was racing to get off the Norton Sound before the storm hit. He was passing the other team when Ivanoff shouted, "The serum! The serum! I have it here!"

With the news of the worsening epidemic, Seppala decided to brave the storm and once again set out across the exposed open ice of the Norton Sound when he reached Ungalik, after dark. The temperature was estimated at −30 °F (−34 °C), but the wind chill with the gale force winds was −85 °F (−65 °C).

Togo led the team in a straight line through the dark, and they arrived at the roadhouse in Isaac's Point on the other side at 8 PM. In one day, they had traveled 84 mi (135 km), averaging 8 mph (13 km/h). The team rested, and then departed at 2 AM into the full power of the storm.

During the night the temperature dropped to −40 °F (−40 °C), and the wind increased to storm force at least 65 mph (105 km/h). The team ran across the ice, which was breaking up, while following the shoreline. They returned to shore to cross Little McKinley Mountain, climbing 5,000 feet (1,500 m). After descending to the next roadhouse in Golovin, Seppala passed the serum to Charlie Olsen on February 1 at 3 PM.

Olsen was blown off the trail, and suffered severe frostbite in his hands while putting blankets on his dogs. The wind chill was −70 °F (−57 °C). He arrived at Bluff on February 1 at 7 PM in poor shape. Gunnar Kaasen waited until 10 PM for the storm to break, but it only got worse and the drifts would soon block the trail so he departed into a headwind. Kaasen traveled through the night, through drifts, and river overflow over the 600-foot (183 m) Topkok Mountain pass.

Balto led the team through visibility so poor that Kaasen could not always see the dogs harnessed closest to the sled. He was two miles (3 km) past Solomon before he realized it, and new he needed to keep on going.

The winds after Solomon were so severe that his sled flipped over and he almost lost the cylinder containing the serum when it fell off and became buried in the snow. He acquired frostbite when he had to use his bare hands to feel for the cylinder.

Kaasen reached Point Safety ahead of schedule on February 2, at 3 AM. Ed Rohn believed that Kaasen and the relay was halted at Solomon, so he was sleeping. Since the weather was improving, it would take time to prepare Rohn's team, and Balto and the other dogs were still moving well, Kaasen pressed on the remaining 25 miles (40 km) to Nome, reaching Front Street at 5:30 AM. Not a single ampule was broken.

Together, the teams covered the 674 miles (1,085 km) in 127 and a half hours, which was considered a world record, incredibly done in extreme subzero temperatures in near-blizzard conditions and hurricane-force winds. Some dogs froze to death during the trip. 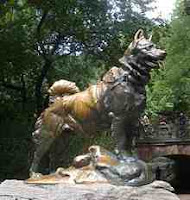 Balto, the Siberian husky was the lead sled dog on the final stretch into Nome. Balto became the most famous canine celebrity of the era after Rin Tin Tin. A statue to Balto is a popular tourist attraction in New York City's Central Park. It should be said that Balto is depicted wearing the medal awarded to Togo who was considered to be the better lead dog by the mushers. The citation reads: "Dedicated to the indomitable spirit of the sled dogs that relayed antitoxin six hundred miles over rough ice, across treacherous waters, through Arctic blizzards from Nenana to the relief of stricken Nome in the Winter of 1925. Endurance · Fidelity · Intelligence"

The resurgence of recreational mushing in Alaska since the 1970s is a direct result of the tremendous popularity of the Iditarod Trail Sled Dog Race, which honours the history of dog mushing with many traditions that commemorate the serum run.

So today we salute the memory and devotion to duty of lead dogs Balto, Blackie, and Togo and all the other brave and courageous dogs pulling the sleds the 674 miles from Nenana to Nome in incredable sub zero temperatures carrying the life saving Diphtheria serum. It is beleived that from the 150 dogs taking part, up to 12 dogs may have died during the life saving run.

PS. from Poppy's dad: There are animal welfare groups who criticise the use of dogs in the Iditarod trail sled dog race. However, when you have over 1000 dogs taking part in any competitive event, including Greyhound racing or even Crufts.  It is highly likely that one or more may die for any number of reasons.

In both 2010 and 2011 it has been reported that no dogs have died during the Iditarod event. The organisers take the welfare of the dogs seriously and some individuals have been banned from the event for maintaining a poor level of animal welfare.