Well, its Christmas day as I write and the weather is still very cold and everyone is staying inside the boat. No one wants to open the door unless we have to go out. I slept in late this morning. You might say I was dog tired. All because I had an incredible adventure last night. We were still moored up in the Marina because the canal is still full of ice. Mum and dad had been up late watching television but had by now gone to bed. Even Jasper the cat was curled up in a ball. However, he had been like that for most of the day. I was half asleep, but keeping all my senses alert because I was on the "middle watch". That's life on board a boat when all the crew have to take turns at being on watch.
It was about one o-clock in the morning when I heard a noise outside. It was a very feint "jing-a-ling" sound and I could hear a voice saying "whoa now, steady, steady". I got out of my bed, Jasper instantly jumped into my nice warm spot and I climbed up onto the couch to look out of the porthole. It was a frosty freezing moonlit night, with lots of bright stars to be seen in the sky. On the towpath I could see a big fat man, with a long white beard (much longer than mine) and he was wearing a red suit. I watched as he went from boat to boat in the marina delivering parcels. I thought the home delivery service is working late, they must have a big backlog of parcels to deliver. He came over to our boat and dropped a couple of packages off on the back deck. 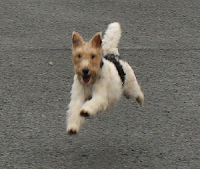 I growled by way of a warning - I heard mum nudge dad and say "go and see what's up with Poppy" Dad came into the saloon and said "what's up girl, do you need to go out" He opened the back hatch and I rushed out from the back deck and onto the towpath. That's when first I saw these six strange looking big dogs tied to the sledge. The fat man was looking at one of the dogs legs. It was at this point that dad came onto the towpath to see where I was. He was very surprised to see the big fat man, but seemed to know who he was.  Dad said "is there a problem" and the big man said "Blitzen has slipped on the ice and hurt himself and I still have thousands of dogs, cats and children to visit."
Dad asked if there was anything he could do to help. The big man said "Can I borrow your dog Poppy" Dad hummed and hawed for a bit and then agreed but made me put on my nice warm coat. The big dog with the limp was taken out of the reigns and I was connected up in his place. Dad said "Poppy, you have a very important job to do, you must help to pull the sleigh. I want you to follow the leader at the front, he is called Rudolph. Just copy everything he does. I will be waiting here until you come back. That will give Blitzen chance to rest his leg for the journey home." The big man climbed up onto the sleigh and said "OK Poppy, we are depending on you now to save the day." Then he shouted "Go Rudolph" I followed Rudolph pulling as hard as I could. We were flying! I was not scared because I had been flying before when we went to the airport. Rudolph said "Just take your time Poppy, don't pull so hard, you will need all your energy because we have a lot of places to visit before we are done." 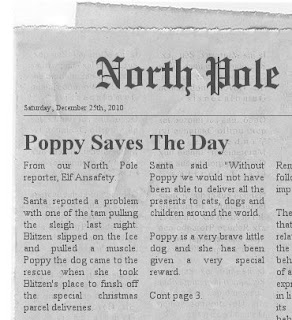 We were out all night, starting and stopping in many different places. Just after we had dropped off the last of the parcels. I could see the sun starting to rise. Soon we were flying low and following the canal, I could see our boat come into view with a curling wisp of smoke out of the stove pipe. Dad was stood waiting with Blitzen on the towpath.

We quickly swapped places, Blitzen even gave me a big lick.  The big man told dad that I had saved the day. I could see that dad was very proud. Soon the sleigh was out of sight in the night sky. Me and dad slowly walked back to the boat. When we got on board, dad moved Jasper out of my bed. He was not the happiest cat being forced to move. As dad climbed into bed with mum she asked if I had done anything dad said - "Yes, Poppy has taken care of business." My paws were a bit sore, but I was asleep in moments.
In the morning when I awoke, I found a couple of parcels with my name on at the side of my bed. In one, I found a nice new collar with a red flashing light for when we go out at night. It had a Christmas card attached. It said "Well done Poppy with love from Nick."
I have been wondering all morning who Nick was.
Lots of Love Poppy XX