Hello everyone.
There are some dogs who have such an emotional link with their human companions that nothing will break the bond or tear them apart.

This is the first in an occasional series of famous (celebrity) dogs of the past and present.

One such devoted dog was "Greyfriers Bobby". Bobby's owner was John Gray who worked for the Edinburgh City Police as a night watchman. Man and dog were said to be inseparable. John died in 1858 and was buried in Greyfriers Kirk (Scots name for church) burial ground. The faithful companion Bobby survived his master for a further fourteen years. Such was the strength of the bond between dog and master. That during the whole of this time Bobby sat in lone vigil over his masters grave.  The only time he left was to eat a meal which was provided for him at a local hotel. In periods of very bad weather he would occasionally take shelter in a near by house.
In 1867, when it was suggested that because Bobby did not have a licence and a master  that he should be put down. The pubic outcry in Edinburgh was such that the Lord Provost, Sir William Chambers (a director of the Scottish Society for the Prevention of Cruelty to Animals) paid for a renewal of Bobby's licence, therefore making him henceforth the responsibility of the city council.
Bobby died in 1872. However it was deemed that Bobby could not be buried with his master within the consecrated ground. Bobby was however buried inside the gate of Greyfriars Kirkyard, close to the grave of his master John Gray. Bobby's fame for his devotion to his master was assured forever. He entered into popular culture as "Greyfriers Bobby" as is still revered to this day. 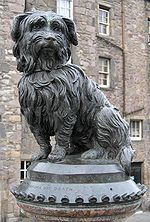 In 1872 a life sized statue of Greyfriars Bobby, was created by William Brodie. This was commissioned by Baroness Burdett-Coutts.The statue stands in front of the "Greyfriars Bobby's Bar", which is located near the south entrance to Greyfriars Kirkyard.

A red granite stone was erected on Bobby's grave by The Dog Aid Society of Scotland. Since the year 2000 this has been utilised as a shrine, by dog lovers from all parts of the world. The shrine often has sticks (for Bobby to fetch) frequently being left. The occasional dog toys and flowers by his band of equally devoted followers.
No visit to Edinburgh is complete for anyone who loves dogs, without a visit to the grave of Greyfriers Bobby and his eternal master John Gray.
The monument reads:
Greyfriars Bobby
Died 14 January 1872
Aged 16 years

Let his loyalty and devotion be a lesson to us all.


Mary Ferguson, a dog lover has written a poem about Greyfriers Bobby - The poem can be read here.

Love to all (especially Bobby)