Just a quick not to remind you all to watch animal X Factor on TV tonight. I auditioned for the Animal X Factor show in the doggies magician and juggler section. Since then I have been busy practicing my skills as a juggler and I have been helped to perfect my act by non other than Jasper the cat. He did not want to help at first until I managed to win him over to the dark side. I did this by using a magical potion worthy of being taught to Harry Potter and friends at Hogwarts school. 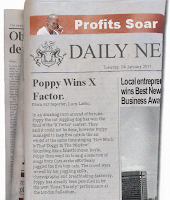 Dad was more than a little surprised to see me and Jasper practicing our act together. It's amazing what you can do with a cat and an extra strong bottle of "Cat Nip" extract! It was a hard fought X factor contest. However, I managed to win through in the end. Everyone said it could not be done, however I managed to keep five cats in the air whilst at the same time singing "How Much Is That Doggy In The Window".

Simon Cowell said that I sounded like a falsetto Susan Boyle. I then went on to sing a selection from the musical Cats as I effortlessly changed patterns as I juggled the four friends of Jasper plus Jasper himself.

In round two, the crowd were wowed by my singing and dancing skills, they were ecstatic at my sure footed choreography. They were knocked as breathless as they were by the level of my juggling dexterity in round one.

Louis Walsh has already pencilled me in for the next "Royal Variety" command performance at the London Palladium. I will also be able to demonstrate some other magical tricks including sawing a cat in half with a chain saw. I have not had chance to try this on Jasper yet. However, I am working on it!

Must go, dad wants to use the computer.