Not much to report about this week. Its been a bit quiet and mum and dad (who is still recovering from Man Flu) are taking things a bit easy as well.  As the weather has been very cold but without any snow we are now moored up miles from nowhere. I have had a bit more freedom to wonder around on the tow path. We don't get many people coming past the boat when it is very cold weather. So I am able to easily keep a weather eye on my watchdog duties.
In the hedgerow at the side of the boat, there is a discarded cardboard box. Jasper the cat has this thing about hiding in dark corners.  I have noticed Jasper going in and out of the box a few times as he tries to hide. Jasper has also taken to stalking in a forlorn effort to catch birds. I have been having a great time barking at the birds to warn them off as Jasper stalks in the nearby bushes. Jasper is quite patient, but has not been able to catch anything so far. I don't think he could catch a cold if he was wet through for a week.
Dad came back from the village this morning to report that there had been a number of missing cats in the district. He said that the mystery was the main topic of talk in the local post office. I could not help but think it would be a good idea if a certain black cat were to go missing. However, with my luck it would be me who went missing instead of him.
Later on I saw a couple of strangers who looked a bit shifty to me walking along the tow path. I hurried back on board the boat. As they passed I did my best impression of a fierce dog, but I was trembling inside really. The strangers hurried past without looking. Dad came a few moments later to see why I was growling. When he saw the strangers in the distance he said "good girl" and gave me a pat. A bit later, I noticed that Jasper was still stalking the birds. This time when he jumped back into the box it rolled over and he was trapped inside. I laughed so much I nearly fell into the water. The cat is a complete idiot and a waste of good space on the boat.
Later dad decided to move the boat a bit further along the canal. Just so that we could fill up the fresh water tank at the water point. The fresh water tank it seems was running a bit low. Its also a good place to moor up if the canal is at risk of freezing over. Whilst we were filling up at the water point mum remarked that she had not seen Jasper for a while. Mum and dad searched the boat from top to bottom. I don't know why they did all that searching.  Because all that Jasper ever did was sleep in my bed. They only needed to look in my bed to see he was not on board.
After a long conversation, dad decided to walk back along the canal to where we had been moored up previously. He took me with him and I had lots of fun sniffing and snuffling along in the hedgerow. We saw the two strangers hurrying along the tow path again. When they saw us they went in a different direction. Soon we arrived at where we had been moored up before and dad started to call for Jasper. It was at this time that I saw the box in the hedgerow bottom rocking from side to side. Because it startled me, I started to bark a danger warning to dad not to come any closer.
When dad arrived he pulled the box out of the hedgerow and opened it up. He was surprised to find Jasper inside. To be honest I had forgotten all about him getting trapped in the box. Well dad was so pleased that I had found Jasper he kept saying "Well done Poppy you are a star" I'm not entirely sure what it was that I did, but I welcomed the praise anyway. Dad carried Jasper back to the boat and then we had a walk to the post office where dad was able to tell the story of how I had discovered Jasper fastened up in a box. 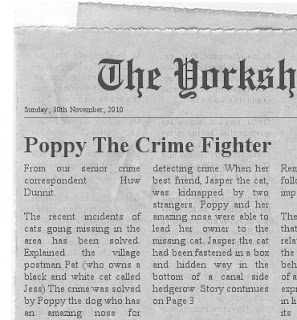 Dad now tells anyone who will listen, how I had searched and found my best friend Jasper the cat, and that he had been kidnapped and incarcerated in a box by the strangers.
It also hit the headlines in the Yorkshire Clarion newspaper. Well, needless to say when we got back I was going to go and have a cat nap in my bed. However, there is a cat napping in there already!
Love Poppy XX