We had an interesting day out last Monday. As it was a nice day weather wise, rather than the usual walk along the tow path ,we went for a walk round the local airfield. There were lots of smelly and noisy flying things arriving and leaving which dad seemed to be very interested in.
Dad took me to look at one of the flying monsters and he was very interested in looking at all the knobs and switches and flashing beeping things. We were invited inside by one of dads friends, I just sat in the seat near the window. Suddenly the door was shut and this loud rumbling noise started. After a while I could tell we were moving, suddenly we were bouncing around and the rumbling noise got much louder. Then everything stopped bouncing and went smooth. I must admit that I started to feel a bit more relaxed. I looked out of the window and it seemed to be much further to the ground than it had been before. But I'm not very good at judging heights and distances. Especially when jumping from the boat to the bank. I have ended up in the water a few times already.
Dad could see I was a bit nervous and so he started to give me a few chocolate buttons. I always enjoy a few tidbits when we go out for a walk. It seems to make dad feel much happier and I don't mind. Soon there was fluffy white things floating past the windows and then the sun was very bright. Dad gave me another chocolate button which I managed to drop as we suddenly changed direction. It rolled across the floor and went down a crack in the floor. Dad passed me another chocolate button and so I tried to make it last. I'm not very good at making them last.
Now dad and the other man were in deep conversation about something called electrickery. As dad was ignoring my plea for another button, I decided to find the one I had dropped. I soon sniffed out the crack where it was and tried to dig it out. Suddenly the driver got out of his seat and opened the little door. I think he wanted the button, but I grabbed the button before he could get it. I jumped back up on my seat and a bit later we returned back to the airfield.
Everyone was making a fuss of me. Dad said I was a very cleaver girl - but I already know that. Soon everyone wanted to stroke and pet me. Dad gave me loads of chocolate buttons on the way back to the boat. Everyone in the marina now calls me "Wonder Dog". A couple of people have been round to see dad from "The Barking Times" they even took my picture. Dad now shows everyone the cutting from the paper. 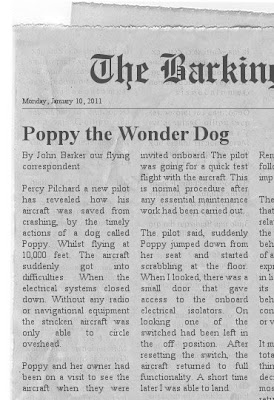 Dad now tells anyone who will listen "Poppy is now being hailed as a wonder dog. She has become something of a heroine to all the pilots at the airfield. I never knew that she understood anything about aircraft, but she does like to play at fly-ball".


So It seems that I'm in everyone's good books - I think I could pee on the carpet and get away without being scolded.